After Sri Ramakrishna’s Mahasamadhi, Swami Vivekananda travelled throughout the length and breadth of India and came in contact with every segment of Indian society – rich and poor, educated and uneducated, strong and weak. This first-hand experience gave him an intimate knowledge and understanding of the spiritual moorings of the nation, the underlying ideals of India. In 1893, he went to USA, participated in the World Parliament of Religions held in Chicago and became a celebrity overnight.  He made a triumphant return to India in 1897 after preaching  Vedanta extensively in America and  Europe. Soon after, he established the Ramakrishna Mission with the twin ideals of “Atmano Mokshartham  Jagad hitaya cha” i.e. for the freedom of the self and for the good of the world. 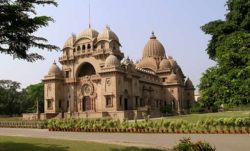 Shortly after Sri Ramakrishna’s Mahasamadhi in August 1886, a monastic order bearing his name was formed by his sannyasin disciples headed by Swami Vivekananda, in pursuance of Sri Ramakrishna’s instructions. The first math (monastery) at Baranagar (near Kolkata) had a very humble beginning in a small rented house. The life therein  was not only austere but also full of hardships. In 1899, the Ramakrishna Math was  moved to its present home at Belur, on the western bank of Ganges, about  six kms. north of Kolkata. It was registered as a Trust in 1901. The Ramakrishna Mission was started by Swami Vivekananda in  May 1897 and was registered in 1909 under the Societies Act XXI of 1860 (Appendix VII).

The Ramakrishna Math and Mission, excluding the Headquarters at Belur Math, have 171 centers (128 in India and 43 in other countries), spread over different parts of the world. The main goals and objectives of these twin organizations, based on the principle of Practical Vedanta, are:

Though Ramakrishna Math and Ramakrishna Mission with their respective branches are distinct legal entities, they are closely related, in as much as the Governing Body of the Mission is made up of the Trustees of  the Math. The administrative work of the Mission is mostly carried out by the monks of Ramakrishna Math, and both have their Headquarters at Belur Math. Though both the organizations undertake charitable and philanthropic activities, the former lays emphasis on the training of the monastic members and on religious preaching while the latter is devoted mainly to welfare services of various kinds actuated by a spiritual outlook. Man is to be served not only as a fellow being, but as the greatest manifestation of the Divine. However,  the name ‘Ramakrishna Mission’ is loosely associated by people with Math activities also. It is necessary, moreover, to point out that the appropriation of the name of Sri Ramakrishna or Swami Vivekananda by an institution does not necessarily imply that it is affiliated either to Ramakrishna Math or to Ramakrishna Mission which have their Headquarters at Belur Math (P.O. Belur Math, Dt. Howrah, India-711202).

As of March 2014 excluding the Headquarters at Belur, there are 178 branches, of which 65 are Mission centres, 46 Math centres and 22 combined Math and Mission centres. Out of 178 centres, 132 centres are located in India and 45 are abroad. Moreover, there were 34 sub-centres attached to different branches where monastic workers reside permanently.

Besides maintaining a number of ashramas and temples with their programmes of worship, religious services and preaching, Ramakrishna Math and the Ramakrishna Mission run several schools, colleges, libraries, students’ homes, sevashramas (hospitals) with  indoor facilities, clinics, dispensaries, rural and tribal development centres, homes for the invalid, etc. In addition, there are many centers run by lay devotees in many States in India under different names associated with Sri Ramakrishna, Sri Sarada Devi and Swami Vivekananda, especially in those areas where Ramakrishna Math or Mission do not have any official center.

The Ramakrishna Movement has contributed largely for the uplift of the downtrodden. Its services, especially in the fields of education, health and relief work in times of distress are well-known.

The common emblem of the Ramakrishna Math and Ramakrishna Mission is a symbolic representation of their ideology. It was originally drawn by Swami Vivekananda himself. The wavy waters represent Karma, the lotus represents Bhakti, the rising sun represents Jnana, the encircling serpent represents Yoga, and the Swan represents Paramatman, the Supreme Self.

The idea of the emblem is that, by a synthesis of all the four Yogas, the Supreme Self is realized.

The motto of the Ramakrishna Math and Ramakrishna Mission is: ātmano mokṣartham jagad hitāya cha, “For one’s own liberation, and for the welfare of the world”.